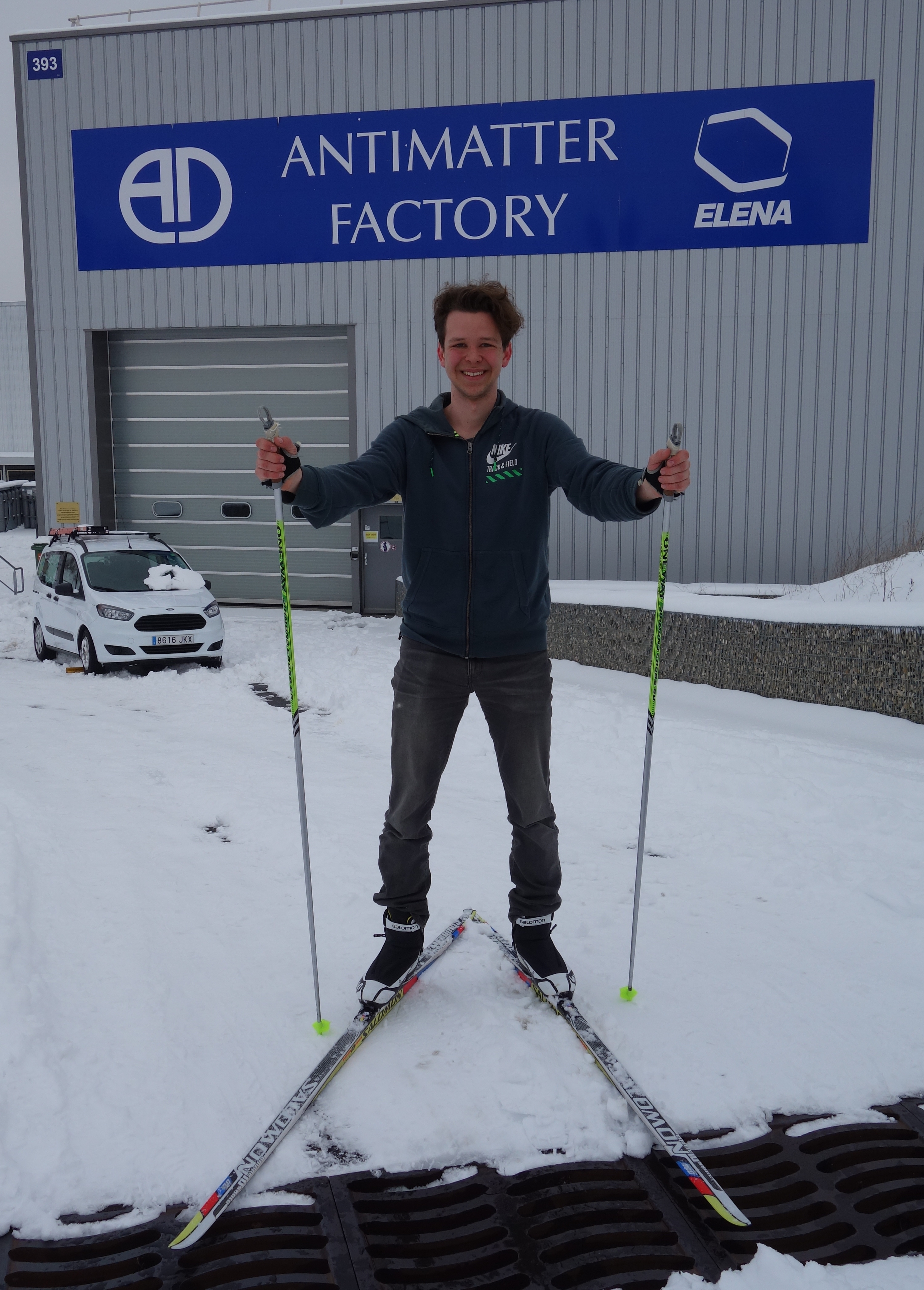 I want to become an astronaut

Working at CERN is a truly wonderful experience and for many a dream come true.

Without a doubt, there are many advantages to being part of CERN. My personal favourites are the exciting challenges, the fact you are creating knowledge on a daily basis and brilliant people you are surrounded with.

Of course, like in any other job, working at CERN also comes with it’s fair share of challenges. In such moments what you need is a relatable person who also has many stories which can keep you distracted for a while. Thankfully, at CERN you can easily find such people and sometimes, if you are lucky enough, your chosen person turns out to be someone who wants to become an astronaut.

Philip and I used to work at the same experiment at CERN. We were both Master’s students feeling a bit overwhelmed with the amount of responsibility we were given and the work our collaborators expected from us. The fact that both of the systems, positron and antihydrogen detector, were pretty mission critical didn’t help much either. That’s not to say we didn’t enjoy our jobs, quite the opposite was the case. Still, sometimes we felt a lot of pressure, especially during the experiment runs.

Somehow during one lunch break, we opened up to each other. We felt so much better afterward that it became our thing - at least once a week just two of us would have lunch together and we would talk about our experiences at work. After some time we started talking about other stuff too and quickly we became very good friends.

Months have passed before he told me he wants to become an astronaut. Not only that he wants to become an astronaut he actually works for it. I have never met somebody who seriously considered doing that. I was shocked. And impressed. Also confused. I mean, yes… it sounds cool, but I did not understand. My first question to him, while shaking the head in disbelief, was “But why would you…?”

Philip: Why wouldn’t you? Just kidding, I guess to me it’s the most exciting job I can think of. What’s crazier than getting into a large cylinder filled with explosives so that you can leave your home planet. I don’t think you can have a bigger adventure than this.

Milena: Crazier than that? I don’t know… Maybe being a friend watching their friend going into a large cylinder filled with explosives leaving the freaking Earth! But seriously now, how could you do it? Philip, wouldn’t you be scared?

Philip: Of course there is something scary about it but at the same time the idea very much excites me. Also just as in professional sports, there’s tons of training that goes into such an effort. I know that if I ever were to be in such a situation, I would have received all the necessary preparation. Another thing is that if you get back you have the chance to share your experience with hundreds of people. Many former astronauts speak at workshops and conferences for young people. I’ve been fortunate enough to hear a few astronauts give talks and I’ve always walked away inspired and in awe. The thought that I could be standing on that podium one day is really cool to me.

That day our lunch break was a bit longer than usual and it was definitely one of my favourite ones ever. The same evening he was actually going to see the talk from Matthias Maurer held at CERN. Philip was very excited about it. I remember thinking how he would indeed be the right person for such an adventure and definitely an amazing role model to anyone, not only those crazy enough wanting to go to space.

Even though we spoke about this topic many times, I asked Philip if he could take a bit of time from his busy schedule and share with you a few answers to my most common questions. Philip, being wonderful human, kindly agreed and here it is - an interview with, hopefully, a future astronaut.

I truly hope you will enjoy reading the answers at least as much as I like bothering him with my questions. :)

Obviously, in the first few minutes after you told me you want to become an astronaut I thought you are crazy. Did not take much to see that you were not crazy at all and would be a perfect person to do it. However, I am sure not everyone is agreeing with me. What do you do when people tell you that the idea is crazy, unrealistic, stupid, etc.?

Philip: Saying “I don’t care what other people say” is of course nonsense. Everyone cares about the opinions of the people they value. That being said, I think it’s equally important to not waste time thinking about comments that aren’t meant to be constructive. If someone says it’s a stupid idea to become an astronaut I’d ask them why they think that way. Maybe they have a good reason and I can learn something new. But if it’s just pure criticism, I try to not take it to heart and forget about it.

This is definitely a great approach! Did this whole idea of going to space came to you at some specific point in time or is it a childhood dream?

Philip: I’d say becoming an astronaut was always there in the back of my mind. When I was five my parents took me on a trip to Florida. One of the things we did was visit the Kennedy Space Center in Cape Canaveral. I remember being inside a space shuttle and seeing the massive Saturn V rocket which they used for the moon landing. As a five-year-old, I didn’t understand all the details but the sheer size of these machines and the the idea of seeing the earth from space excited me.

That is so amazing! Ah, I really wish you can make your childhood dream come true! How one becomes an astronaut at all? How do you prepare yourself for it?

Philip: Alright, now we’re getting more technical ;) There are a few different routes to becoming an astronaut. You can be a military test pilot, medical doctor, aerospace engineer or a scientist (physicist, biologist, etc…) Since I’m neither a badass fighter pilot nor a doctor who saves lives, I’ll have to either take the path of the engineer or the scientist. I talked to Matthias Maurer, a future astronaut when he gave a talk at CERN. I basically asked him what I should do to become an astronaut. To my surprise, he said that the field where you do your Ph.D. doesn’t really matter all that much as long as it’s something technical or scientific. What matters more, and that’s the really a surprising part, is your soft skills. It was very interesting to me that it’s more about your skills to communicate and work together with people. A big part of that is also languages. Currently I only really speak German and English as well as some tiny basics of French and Russian. So in the future, I definitely want to work on those. Then every astronaut has to have a pilot’s license and diving experience is also recommended since that’s used for zero gravity training on earth. So in short, I’ll probably pick a science related Ph.D. while working on languages and other skills on the side.

Especially French. :P All (inside) jokes aside, all these seem quite demanding which is not a surprise. Still, Ph.D. is difficult enough and on top of that, you need to work hard in different areas that are challenging as well. How do you do it? Where do you find the motivation?

Philip: That’s an easy one. To me, it’s the biggest adventure you can have.

Fair enough, but still achieving that goal is going to be quite hard. Do you have a strong support system? Do people around you support this decision?

Philip: Yes I’m very fortunate to have a super supportive family, a wonderful girlfriend and great friends. Some of them even have blogs … ;)

Hahah… of course. You will have my support always. :) Now I would like to ask you a question I have never actually asked you before. Who do you look up to? I mean apart from me. :D

Philip: Hm, that’s a more difficult one. Having been a runner all my life I have a few sporting heroes. The first person that comes to mind is the current marathon work record holder Eliud Kipchoge. He’s got this fascinating combination of absolute dedication to his craft and genuine happiness with his life. His running is graceful and even at full speed, you’ll always see him smiling. Enjoying what you do even under extreme pressure is something to strive for. I can only recommend watching the “breaking 2” documentary on YouTube… ok I’ll stop geeking out about running now.

Haha, don’t worry you can talk about running. It just that your answer really surprised me. For some reason, I was expecting a scientist, but this makes so much sense. And Kipchoge is truly brilliant. Just like you. :) For the end, do you have any comments/advice/suggestion for students who want to achieve/do things that not many have done?

Philip: I think we could have a whole talk about that one alone, I’m sure you have some great thoughts about this topic too. I’ll keep it short for now though. I’d say the number one thing is work hard but don’t kill yourself in the process. It’s easy to fall into the trap of working like crazy and forget about your friends and hobbies. So give it your best but have some fun along the way and give yourself some rest. One of the most important things working at CERN has taught me is that no one ever saved the world alone and especially not in a night shift ;)

At the same time this makes really nostalgic but also makes me laugh so much. For many reasons, I will forever use this quote “No one ever saved the world alone and especially not in a night shift.” :D These are very nice words to live by and a good way to wrap up this interview. Thank you so much for becoming a part of Tau Bytes, sharing your passion, advice and time with us and, mostly, thank you for being such an amazing friend.

Philip: Anytime, you’re very welcome and thank you for having me.