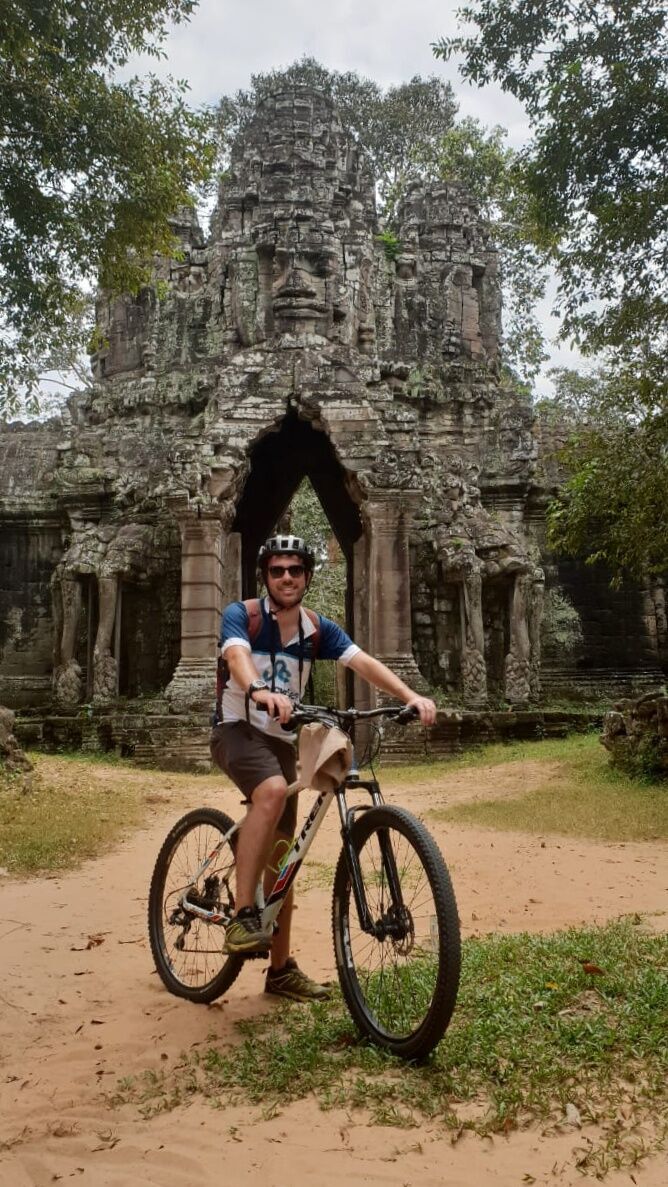 I explore the world

Today James is in Bangalore, a big modern city also known as the Silicon Valley of India, and soon he will be heading to Hampi for a few days - a UNESCO world heritage site.

James has already visited 42 countries and his journey is continuing while having occasional meetings with CERN colleagues in different corners of the world.

During his travels James took a small break to chat with me about his experience and the role CERN played in making the decision to begin his adventure around the world.

Hope you enjoy the interview and, who knows, maybe James’ story will give you a final push to head on a big adventure of your own.

As somebody who always wanted to travel the world but never put those words into action, I find what you did so inspiring. Many are probably in the same situation like me – loving the idea of travelling around the world but always finding some excuse not to do it, the most common being “it’s not the right time”.

So tell us, James, how did you make this possible? How does a person wake up one day and say “OK, I am doing this! I am going to leave everything behind to explore the world”?

James: Two things helped me decide that I should start my trip around the world: the end of my contract at CERN and having enough savings from my earnings while at CERN. I worked at CERN for 3 years as a Senior Research Fellow in the Beams department, working on control systems software.

As the end of my contract at CERN was approaching and I hadn’t yet found a job it seemed obvious to me that spending money on an apartment while looking for a job was a waste when I could travel instead. A gap in between jobs, especially if you don’t have another job lined up, is the perfect time to travel because you have no time restriction (except until you run out of money!). So I gave up my apartment, put my belongings in storage and started my journey.

You make it sound so easy but in reality it takes a lot of courage to actually make this happen. Is this something you always wanted to do or was it just a positive consequence of not having another job immediately after CERN contract has expired?

James: I’ve always thought about travelling around the world and had already travelled a lot while working at CERN, and a little before CERN as well. My first trip abroad was to Egypt alone for a month when I was 21 where I studied Arabic, just for fun. After that I travelled a few times, including to some conferences around the world during my PhD, but I really only started travelling a lot when I started working at CERN.

Seems like working at CERN was a big advantage to make all of this possible.

James: It certainly was! Even before my current round-the-world adventure throughout my 3 years at CERN I travelled a lot. People come to CERN because it’s the greatest particle physics laboratory in the world but that’s only one aspect of actually working there. One of the great things about CERN is its international nature - working at CERN you meet people from all over Europe and the rest of the world. The same can be said for Geneva - it’s such an international city and you’ll meet people from all over the world.

If you love travelling then CERN is a great place to work: lots of holiday days, great salary, and you’ll find plenty of like-minded people to travel with!

And of course, CERN is based in Switzerland and France. Switzerland and France themselves are great places to travel - there are plenty of beautiful mountains, lakes, cities, towns; perfect for activities such as hiking and skiing. And Geneva airport and train station are well connected making weekend trips easy and cheap.

Some of the best trips during my time at CERN were to fellow colleagues home countries - it’s great when you have a local show you around their own country!

James: Indeed! As I mentioned, people working at CERN come from different countries and many also visit new ones. Meeting somebody you worked with at the other end of the world is not unusual at all.

For example, the other day in Bangalore I met for dinner with a CERN summer student alumni, who I worked with a couple of years ago and we ate some great street food. But she wasn’t the only friend from CERN that I’d met up with since I began my adventure! Just before I left the UK to begin my trip a Polish friend visited me; and before I left Europe I flew to Austria to visit a Croatian friend who studies for a PhD there. From there, I flew to Tokyo where I met up with a Spanish friend who had moved there to work on his master’s project. In Sydney, I stayed with a French friend who had recently moved there for a new job. I joined a Czech friend in Nepal for hiking in the Himalayas and he’ll also be joining me in India next month to explore the north and north-east of the country.

That sounds so incredible! Now I want to come and meet you somewhere in Asia! It just sounds like you are having so much fun! What are some of the most exciting thing that you have done on this trip?

James: One of the most memorable things that happened in Australia was while kayaking in Byron Bay a whale deciding to swim underneath us!

And one of the best things that I have done on my trip is cycling from Siem Reap, Cambodia to Ho Chi Minh City, Vietnam. It was a great way to see the countries and meet local people rather than just fly into the tourist hotspots. We cycled 650km during the 16 day tour through villages, rice paddies and backroads; at times it was very difficult due to the terrain and the heat but definitely worth it. I highly recommend going on a tour with https://www.social-cycles.com/

Woooow, that is really something special! And thanks a lot for the recommendation. You told me you visited 42 countries in total, which is beyond impressive, but is there a country you would say you liked the most?

James: I don’t have any single favourite country as every country that I’ve visited has been different. Different parts of the same country can also be very different - for example, south India is very different to north India. I’ve also loved eating all the food in every country that I’ve been to, except the tarantulas in Cambodia - I won’t be ordering those again! I’ve taken cooking classes in Japan, South Korea, Thailand, Vietnam, Cambodia, and India and loved learning how to cook all their different dishes.

Oh yeees, I remember the photo of the tarantula dish you posted. So disgusting. I lost my appetite for couple of days after seeing that. I don’t even know why you would try it in the first place but okay… And talking about horrible spider creatures, one of the countries you visited is Australia which is known for all kinds of dangerous animals. Did you have any unpleasant or scary moment while being there?

James: The most scary thing that happened in Australia was when I was attacked by a bird and thought I might go blind in one eye. I had no problems with snakes or spiders, it was a normal bird that attacked me! I was sitting on a bench, minding my own business, when suddenly I hear a loud noise and turn around only to be attacked in the eye. I had to go to hospital and found out that the bird had scratched my cornea. I visited 3 hospitals over a period of a couple of weeks in total because of the attack. The doctors weren’t sure if it was going to heal and I had blurry vision in the eye for about 6 weeks, after which it had healed.

Oh nooo! Good that you are fine now. Hopefully, you won’t have any similar bad experiences during the rest of your trip. And certainly I hope this incident hasn’t affected your overall impression of Australia. I am also interested to know, since you visited so many countries could you tell us what you noticed when it comes to cultural differences between them?

James: It’s fascinating when travelling to different countries to see how different some cultures are to European cultures. For example, everyone in Japan is very polite and everywhere is very clean; the best hostels I’ve stayed in were in Japan because they were so clean. In Australia the hostel standards were way lower and hostel workers didn’t care so much about cleanliness. Unfortunately in many other Asian countries there is rubbish everywhere and throwing rubbish on the ground is normal practice :(

Japan sounds like my type of country! Haha… let’s see, maybe Japan will positively influence the rest of the world in that regard. ☺ For the end, do you maybe have any message/advice for people thinking of starting their tour around the world?

James: Just do it! If you have the time and the money then why not? If you’re changing jobs then at least take a few weeks off in between for a mini adventure! Who knows, maybe it’ll turn into a big one!

Thank you so much, James. It is always such a pleasure talking to you. Wish you the best of luck and no bird attacks in the future! ☺